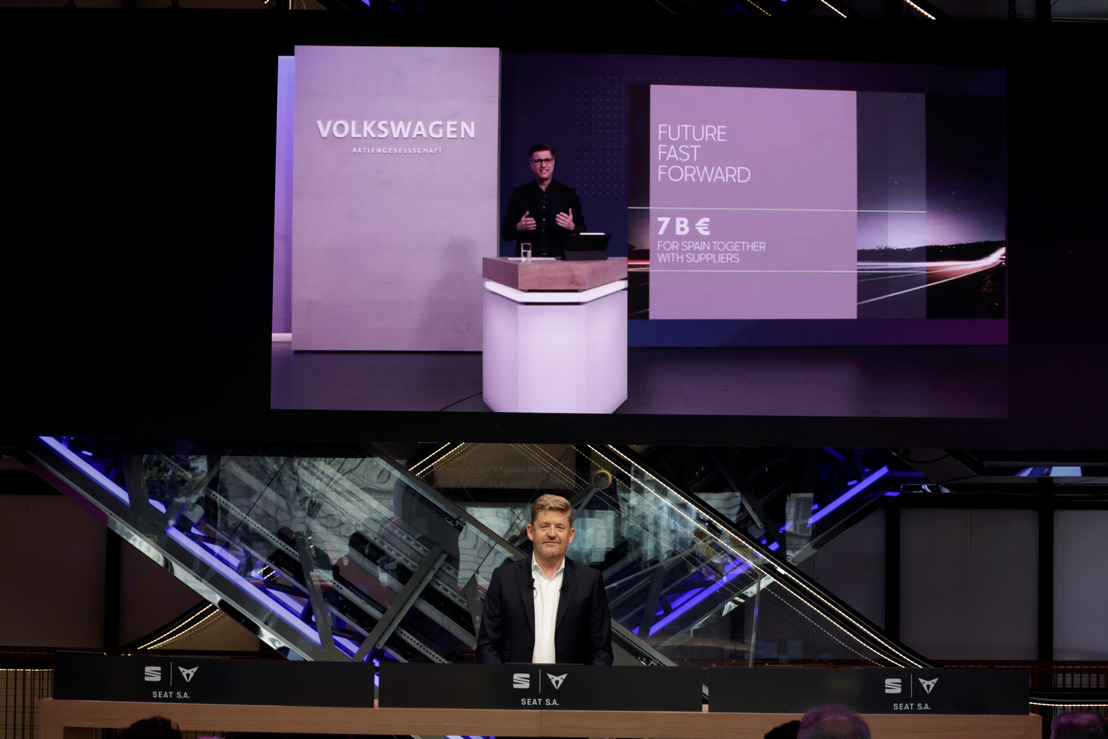 SEAT S.A. and the Volkswagen Group have announced their intention to mobilize more than 7 billion euros to electrify Spain as part of their commitment to the country and developing the electric vehicle. This would represent the single largest industrial investment in Spanish history. The Future: Fast Forward program would include the installation of a battery cell factory in Sagunto, Valencia. All plans and investments are still subject to final approval of the PERTE submission.

“This project is highly important – for Volkswagen, for Spain, and for the whole of Europe. It’s our ambition to electrify Spain and we are willing to invest more than 7 billion Euro together with external suppliers for the electrification of our Martorell and Pamplona plants and the localization of the electric battery production value chain in Valencia", said Thomas Schmall, member of the Volkswagen AG Board of Management responsible for Technology and chairman of the SEAT S.A. Board of Directors.

Volkswagen Group aims for a production capacity of 40 GWh annually and plans to employ more than 3,000 people in Valencia. The timeline is tight: To be ready to start production in 2026, construction of the plant must start by the end of the year. The first milestone must be the positive outcome of the PERTE submission and finalized permits. “In Valencia, we will build up nothing less than next-generation cell production: A standardized factory, producing Volkswagen’s cutting-edge unified cell and supplied with renewable energy, enabling a sustainable battery production. And it will create a strong pulling effect in the whole battery value chain in Spain and beyond”, said Schmall.

Wayne Griffiths, President of SEAT S.A., said: “Future: Fast Forward has the potential to transform the Spanish automotive industry and democratize electric mobility across Europe. The more than 7 billion euros Volkswagen Group and SEAT S.A. would mobilize for Future: Fast Forward would represent the largest industrial investment in Spanish history.”

Volkswagen Group and SEAT S.A.’s goal for the Iberian Peninsula is to electrify Spain by creating a European Electric Vehicle Hub, building up a battery cell production site and a full local-for-local ecosystem.

The company previewed one of the new CUPRA models, which will arrive in 2024: an all-new electrified SUV with mild-hybrid and plug-in-hybrid versions that will be produced in Hungary. With an all-electric range of around 100km, it will lead a new generation of PHEVs.

The new SUV is one of four new models that will soon join the CUPRA range. In 2024, the CUPRA Tavascan and the new SUV will hit the market, followed by the urban electric vehicle in 2025, with one further car to come. In 2022, CUPRA plans to double its sales, double its sales network, and double its turnover to 5 billion euros – as well as doubling the number of CUPRA Masters and CUPRA City Garages around the world.

The President of SEAT S.A. explained that the company needs to transform itself into a more robust and sustainable organization, increasing competitiveness and profitability: “The future sustainability of our company is the growth of CUPRA. We see our new brand CUPRA as the lever to improve profitability and we must put all our efforts behind its growth,” Griffiths said.

The company’s financial results for 2021 contained several trends that will be important for the future in a year that was otherwise marked by uncertainty and the global shortage of semiconductors preventing SEAT S.A. from achieving the recovery it had hoped for. It led to a massive loss of production volume; a negative impact on sales, and a negative operating result of -371 million euros (2020: -418 million euros). Profit after tax was -256 million euros (2020: -194M €) and turnover increased to 9,256 million euros (+5.4%), while average sales revenue per vehicle reached 16,850 euros per car, almost 480 euros per vehicle higher than in 2020.

“Despite the negative environment and losses, we continued on our aggressive investment path and invested more than 900 million euros in R&D and investment expenditures in 2021, a 7% increase vs 2020. This shows our strong and ongoing commitment to bring future products to the market. In addition, we continued to make significant investments in building the CUPRA brand,” said David Powels, Vice-President for Finance and IT at SEAT S.A.

The global semiconductor shortage limited production and SEAT S.A.’s capacity to meet the high demand for both SEAT and CUPRA brands, which returned to pre-pandemic levels. The company's sales grew by more than 10%, from 427,000 to 471,000 cars, driven by CUPRA and the demand for electrified models.

CUPRA tripled its sales, reaching almost 80,000 cars, and turnover grew from 932 million euros in 2020 to almost 2.2 billion euros in 2021. Sales for the SEAT brand exceeded 391,000 cars. This represents a 2% decline from 2020, which again can be attributed to the shortage of semiconductors. Overall, sales of CUPRA and SEAT electric and hybrid vehicles quadrupled from 15,000 to 61,000 cars.