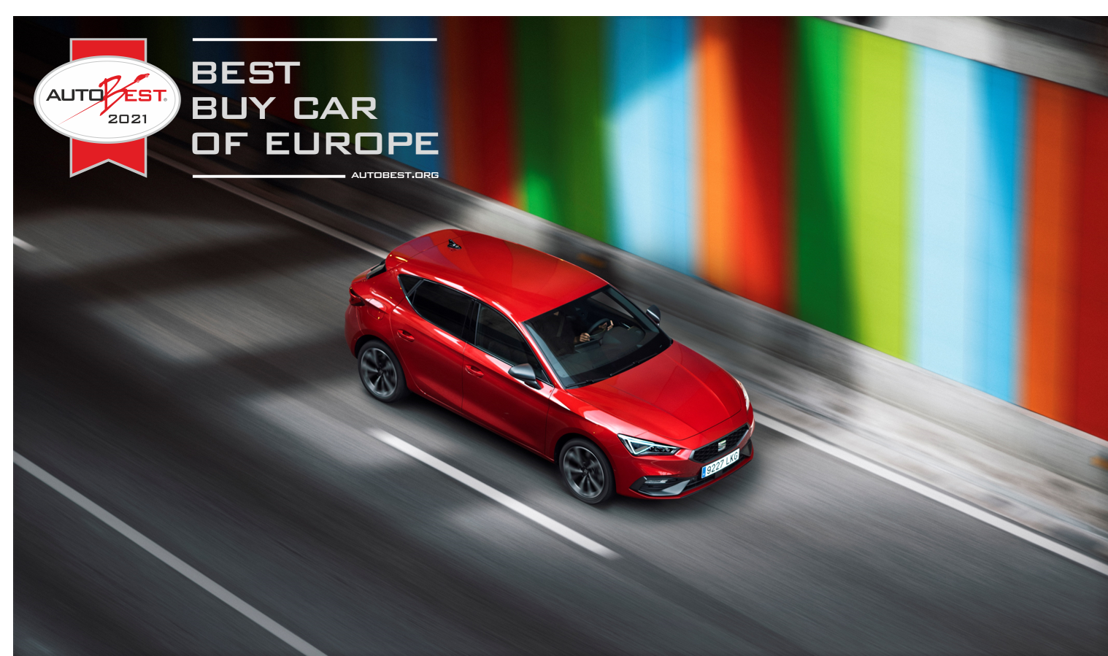 The all-new SEAT Leon has been voted “AUTOBEST 2021”, the European accolade for the “Best Buy Car of Europe 2021”. The AUTOBEST jury is a panel of 31 judges made up of some of the most recognised automotive journalists from all over Europe. It’s the second time in SEAT’s 70 years of history that the company has taken the honour; in 2017 the SEAT Ateca took the same award. It highlights the dedication to developing vehicles that go beyond the ordinary and offer something truly exceptional in the market.

“We are proud that our new SEAT Leon was elected “AUTOBEST 2021”, the best possible recognition for the team that was involved in the launch of the best Leon ever. A car designed, developed and produced in Barcelona, this award gives us renewed strength to look confidently into the future. The SEAT Leon has proven generation after generation that it’s an important pillar of the segment, and the award from the AUTOBEST judges reinforces the significance the Leon has in the market,” said Wayne Griffiths, President of SEAT and CUPRA. “It has brought the segment to a whole new level, mixing impressive design with technological advances to create a vehicle that provides everything customers need.”

The all-new SEAT Leon has an amazing track record, across all generations of the segment-defining vehicle, more that 2.3 million units have been sold. The SEAT Leon has been a bestseller in Spain since 2014 and the introduction of the fourth-generation vehicle brought the best Leon ever to the market.

The SEAT Leon’s success has been built on a €1.1 billion investment to help take it to the next level in terms of connectivity, efficiency, dynamism and safety, but also to prepare the vehicle’s production facilities, as for the very first time, it is available with a plug-in hybrid powertrain, in addition to the other energies.

The all-new SEAT Leon was designed and developed in Barcelona, to maintain its standing as not only a core pillar in the brand’s vehicle line-up, but also a standout vehicle in the segment. Greater levels of connectivity, making it truly part of our digital lives and the first fully connected car of the brand, a suite of new powertrain technologies; petrol (TSI), diesel (TDI), Compressed Natural Gas (TGI), mild-hybrid (eTSI), and plug-in hybrid (e-HYBRID), giving drivers a vehicle that most closely matches their lifestyle and needs, and the integration of the most advanced driver assistance systems available, make the SEAT Leon one of the best in its category.

The advances to the all-new SEAT Leon in terms of connectivity, efficiency, performance and safety, recently proven by the five stars accomplished in the 2020 Euro NCAP, have been achieved, in part, thanks to the vehicle’s MQB Evo architecture, providing the toolkit required to develop a vehicle that meets the many and varied needs of SEAT’s customers.

The AUTOBEST Award is among the most prestigious in Europe and has run consecutively since their inception in 2001. The 31 journalists who make up the awarding panel had the possibility to test drive the range of SEAT Leon powertrains – including the plug-in hybrid version - during the final, celebrated in Austria at the beginning of November.