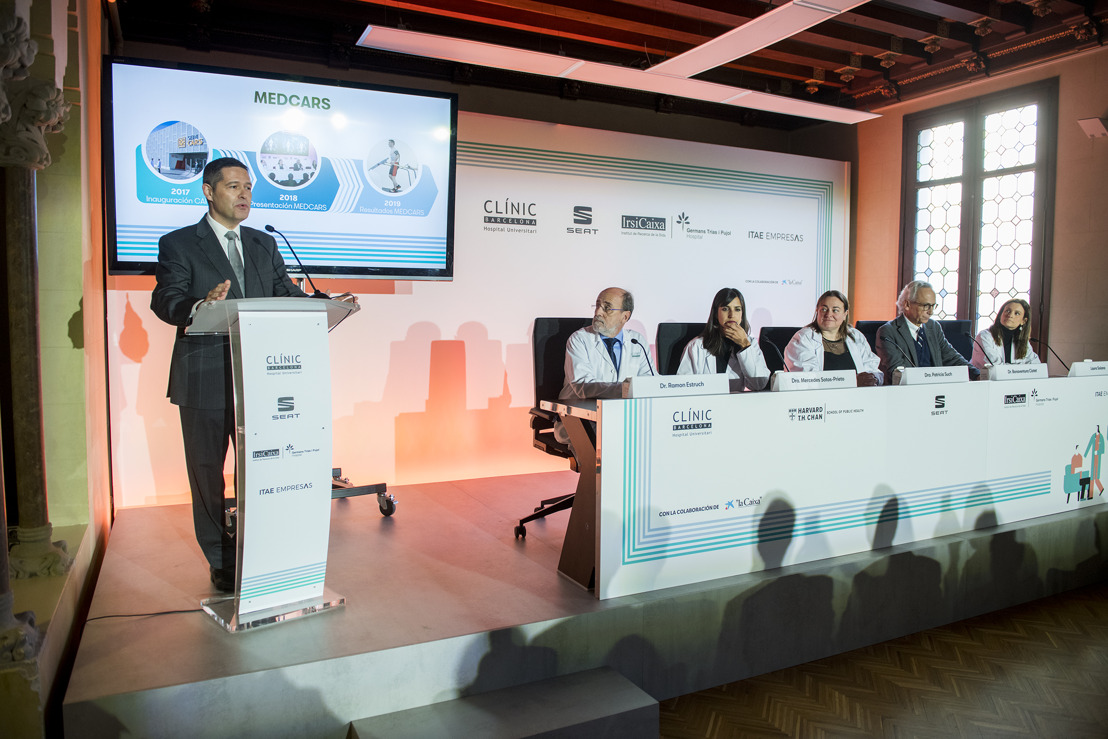 The analysis was made in the framework of the SEAT Healthy Company Scientific Committee and successfully confirmed the direct correlation between the Mediterranean diet, a real, guided change in habits and improved health. At the same time, the research results now form a collection of the world’s largest database of microbiome associated with the Mediterranean diet, which will enable further research in the future.

The MedCARS team worked for one month to integrate healthy habits into the lifestyle of around 500 employees at the SEAT factory and verify their impact on their state of health. Prior to this, the Scientific Committee had carried out a retrospective study into the health of SEAT workers, where nearly ten million health data were analysed, which led to the conclusion that the company’s workforce is a universal sampling of the surroundings and that the results can be extrapolated to the rest of the population.

A representative sample of the population

Dr. Patricia Such, head of Health and Safety at SEAT, pointed out that “together with schools, work centres are the only other large group venues where action can be taken to improve health. The study aimed to demonstrate that an intervention on the lifestyle of SEAT employees, which includes promoting the Mediterranean diet, more physical exercise and improved emotional health, would lead to a significant improvement in their state of health.”

In order to test this hypothesis, two groups of 300 volunteer employees were compared who underwent a thorough medical examination and an analysis of their eating habits and the amount of sport they practice. For six months, one group was given guidelines on how to improve their lifestyle, including advice on nutrition, healthy recipes, lifestyle and sport; a monthly gift of five litres of olive oil and 30 grammes of nuts daily; a healthy sandwich at work; a healthy choice in vending machines; discounts at Veritas supermarkets and diet and psychological assistance in the form of seminars.

After months of analysing the behaviour of the simple, a significant improvement was seen in the factors associated with cardiovascular risk in the intervention group: reduced body weight and waist circumference, improved lipid profile and a decrease in the inflammatory markers, which for example are associated with a progression of arteriosclerosis. Furthermore, the intervention group had a better mental health index and better quality of sleep.

In addition to this direct relation between the change of habits and a substantial improvement in health, psychological and emotional support was proven to be decisive for participants to firmly integrate new habits. Laura Solana, the training director at ITAE Empresas, underscored that “in order to avoid falling into traps when aiming to generate new habits, we work on adapting to change and managing the expectations that come with it, as well as on self-motivation strategies and organising the surroundings.” Family members were also present in some of the support sessions.

Thanks to the study, the most extensive collection of big data has been gathered on microbiome linked to intervention with the Mediterranean diet. Researchers collected samples of intestinal microbiome before and after the intervention. New lines of research are possible with this database that will enable analysing the impact of nutritional changes on the intestinal microbiome, as well as the relationship between the intestinal microbiome and general health. This part of the study will be conducted by the IrsiCaixa AIDS Research Institute, a centre which is jointly sponsored by “la Caixa” and the Department of Health of the Catalan Government.

One more step in SEAT’s commitment to health

SEAT has become a benchmark of occupational health in a corporate environment. Following the inauguration of CARS (Healthcare and Rehabilitation Centre) in 2017, a one of a kind medical centre which performs more than 70,000 medical procedures annually on SEAT employees, and the presentation in 2018 of the results of a retrospective study that analysed the state of health of more than 30,000 people, MedCARS embodies SEAT’s commitment to promoting healthy lifestyles among the worker population and their families, beyond the company itself. With MedCARS, the goal is met of improving the health of workers, generating scientific knowledge for society and advocating for health as a key component for increasing the competitiveness of businesses.