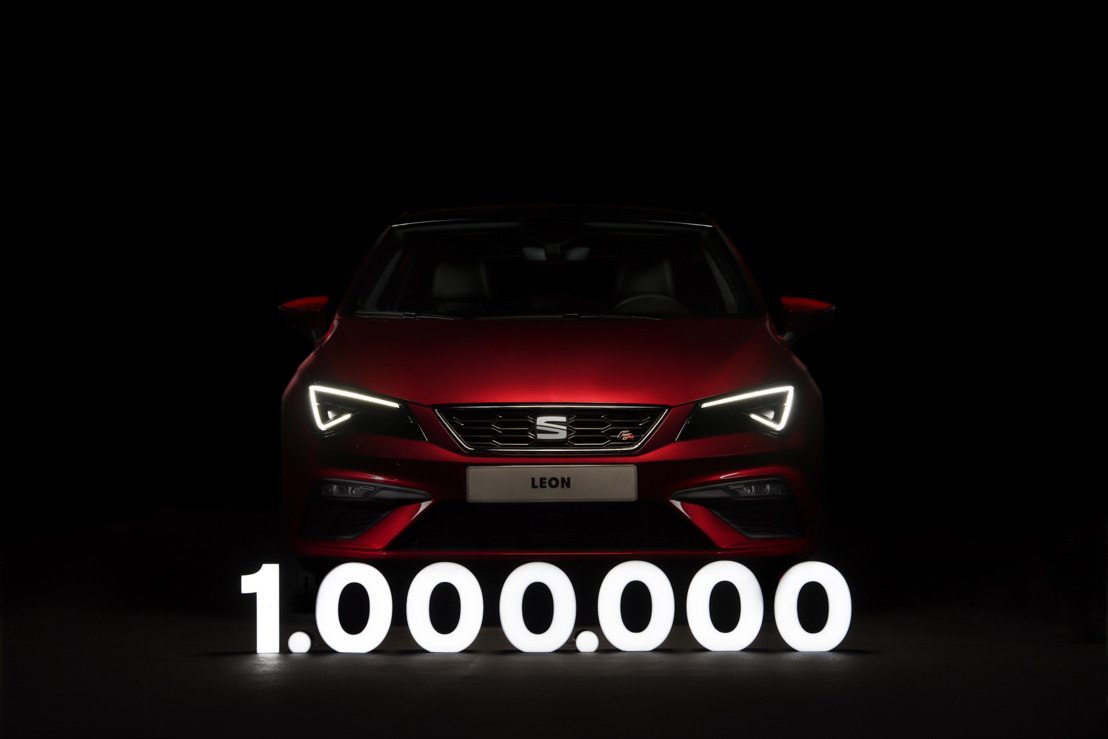 Martorell, 29/07/2019. This week the third generation SEAT Leon has achieved the million
units sold mark since its launch in 2012. SEAT's top-selling car was presented at the Paris Motor
Show that year and shortly after reached the market with a completely renewed design. Thanks to the
"formula Leon", based on design and functionality, the Leon became the most widely sold model in
the SEAT range, overcoming the dominance held by the Ibiza for the previous 30 years.

Designed, developed and produced in Martorell, the current generation Leon has been built on the
Volkswagen Group's modular MQB platform since the beginning. This platform involved an investment of 800 million euros at the time and meant an unprecedented leap in terms of technology. With the Leon, production quality increased in line with the Group standards, and furthermore, it has
consolidated 1,600 direct jobs at the factory and more than 6,000 in the auxiliary industry.

SEAT President Luca de Meo explained that "the SEAT Leon, and in particular the third generation, is the true pillar of the brand; it is the most widely recognised and appreciated car by SEAT customers on all five continents. The Leon is one of the major driving forces behind the transformation of the company and has contributed to the sales record that SEAT posted in 2018, with 517,600 vehicle deliveries."

The car that changed SEAT
The success of the Leon transformed SEAT's recent history from a commercial and financial
standpoint, and implied a qualitative leap in the perception of the brand image. Likewise, the Leon
also enabled increasing the profitability margin per SEAT model, which contributed to turning the
negative figures of 2012 (-149 million euros) to the best ever in the history of the company (profit after tax of 294 million euros in 2018).

SEAT closed 2012 with a total of 321,000 cars sold, nearly the same amount of vehicles delivered
in the first six months of 2019 (314,300). Furthermore, the Leon has been a key model for boosting
sales in countries such as Germany or the UK, where SEAT deliveries have gone up close to 70% and
60% respectively since 2012. The Leon is still SEAT's top-selling model, and one out of every four
cars sold by the brand in the first six months of 2019 was a Leon.

The Leon was the first car in its segment to feature the iconic headlamps equipped with full LED
technology which, together with the blisters on its dynamic chassis, granted it personality and
sportiness. The gradual implementation of the latest technologies such as SEAT Full Link and more
recently the digital cockpit and wireless charger provided customers with connectivity and
convenience inside the vehicle. These advances have all contributed to the creation of SEAT Leon
third generation own seal.

At the beginning, SEAT presented this compact with three body types: the three-door, the five- door
and the station wagon, which was later joined by the X-PERIENCE version. The SEAT Leon is currently commercialised with the five-door and Sportourer ST body types, equipped with petrol, diesel and the sustainable compressed natural gas engines, as well as a CUPRA version.

SEAT Vice-president for Marketing and Sales and CUPRA CEO Wayne Griffiths emphasised that "the SEAT Leon has been, is and will continue to be one of the most relevant models for both SEAT and CUPRA. Its different body types and versions make it the brand's most multi-purpose and versatile car of the brand."

Did you know that
•    The first generation SEAT Leon was launched in October 1999; therefore, this year it is celebrating its 20th anniversary.
•    In total, SEAT has sold 2,210,712 units of the SEAT Leon: 534,797 of the first generation, 675,915 of the second and 1,000,000 of the third. The current generation accounts for 45% of all Leon sales in the past 20 years.
•    The SEAT Leon is sold in countries on all five continents, from Spain (the country where at present the most SEAT Leon units are sold), to Mexico, Morocco, Singapore or New Zealand.
•    Germany, Spain and the UK are the three markets where the most third generation Leon have been
sold.
•   If the 1,000,000 SEAT Leon cars sold since 2012 were placed in a straight line, they would
stretch for a distance of 4,370 kilometres, which is three times the distance between Barcelona and
Wolfsburg.