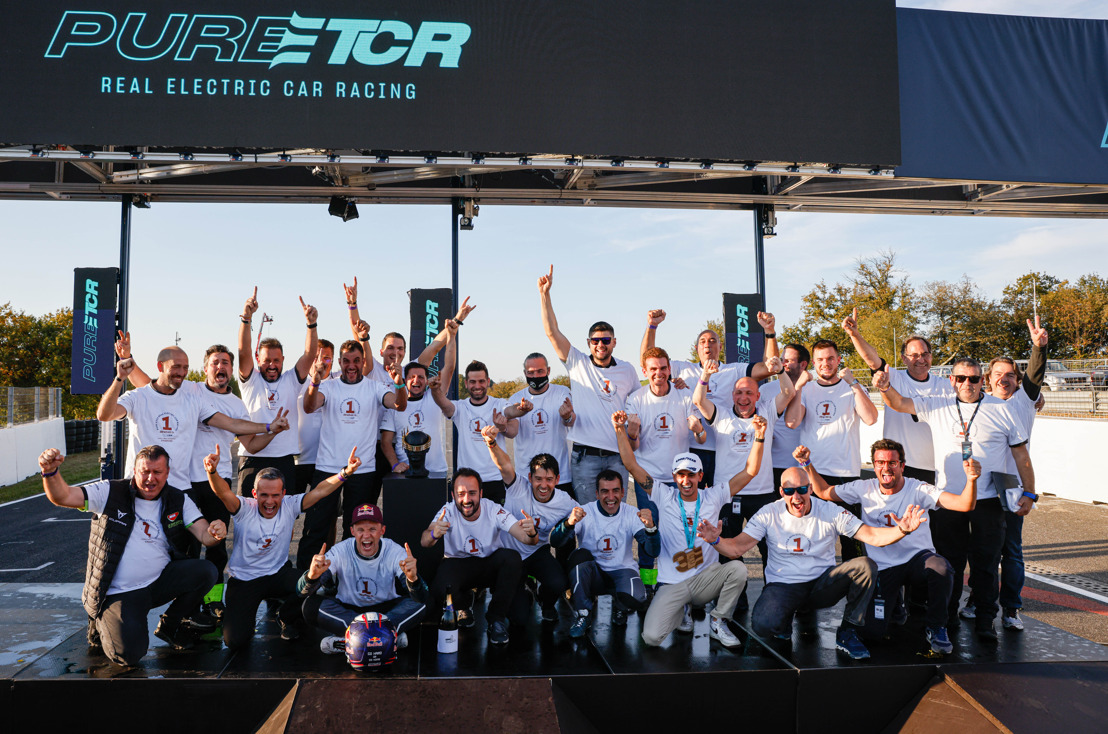 CUPRA and Mattias Ekström have taken the chequered flag as PURE ETCR champions at the Pau-Arnos circuit in France. The winning team made motorsport history by winning the first ever electric touring car championship behind the wheel of the CUPRA e-Racer, a technical feat delivering 500kW (680PS), was the car to beat during a season in which the difference between drivers and teams was incredibly tight.

Almost a decade after contributing to the reinvention of touring car racing with the development of the first TCR concept car and winning the TCR International Series title in 2015, CUPRA reaffirms its commitment to innovation and motorsport with its latest victory. At the same time, CUPRA accumulates invaluable electric car knowledge, key to the future development of both road and race cars.

"Congratulations to Mattias Ekström, Jordi Gené, Mikel Azcona, Dániel Nagy and the entire CUPRA X Zengő Motorsport team! At CUPRA we love challenges and ambitious adventures; it’s part of our DNA," said Dr. Werner Tietz, Executive Vice-President for Research and Development at CUPRA. "Our PURE ETCR victory allows us to show the world that electric technology can also deliver competitive and exciting touring car racing, while allowing us to continue to learn and develop technologies that we will see in road cars in the future. The experience gained with the CUPRA e-Racer will soon be in CUPRAs our customers will be driving on roads around the world.

Ekström and CUPRA went into the final round of the season at the top of the drivers' and manufacturers' standings, but the title could not be taken for granted - it had to be sealed on track. The Swedish driver showed that he was focused on solidifying the team’s position right from the start of the weekend, winning both his group battles and also setting the fastest time in qualifying. In the race, despite an incident with a rival that forced him to pit, Mattias managed to finish fifth and score the points he needed to clinch the title.

"I am very proud of what we have achieved in CUPRA in the first season in the history of PURE ETCR," said PURE ETCR champion Ekström. "I felt very strong throughout the year with the CUPRA e-Racer and I knew that wherever we went we were going to be competitive. It has been a pleasure to be part of the team with Mikel, Jordi and Daniel, and also to compete with the rest of the top drivers in this championship. It is a title to remember".

Mikel Azcona finished third in the last round of the season and also in the championship standings. Jordi Gené, who has been one of the most consistent drivers of the season, was fourth, and Dániel Nagy finished eighth in a year of learning for him.

All their results have been crucial to CUPRA winning the manufacturers' title, beating Romeo Ferraris-M1RA and Hyundai Motorsport N by 67 and 68 points respectively.

​The CUPRA e-Racer's road to victory

The victory in PURE ETCR is the culmination of an ambitious project whose foundations were laid in 2017. CUPRA Racing began working on the creation of the first electric touring car when racing using electric technology was a real utopia. There were a multitude of questions surrounding ​ performance, range, temperatures and safety... but the company took on the challenge with determination and conviction and found the answers.

CUPRA Racing applied the knowledge acquired in competition for decades and began to work on the design of the concept car without any reference points, as there were no regulations to adapt to. The engineers carried out numerous studies and simulations to choose the right technology to achieve their own predetermined performance goal. Once the general concept had been defined, attention turned to the batteries and motors - incredibly heavy and bulky systems that needed to be placed in the chassis. That meant the engineering team needed to define the structure of the electrical and electronic parts.

The technology was put to the test with more than 5,000 kilometres of testing, and after the integration of the battery and all the electronic systems associated with it, designated by PURE ETCR and unique for all manufacturers, the CUPRA e-Racer was ready to compete.

The result of CUPRA Racing's work was a futuristic-looking racing car with 500kW (680PS) of maximum power, and maximum torque of 960Nm achieved thanks to the four electric motors located on the rear axle, that allow it to accelerate from 0 to 100 km/h in 3.2 seconds. The CUPRA e-Racer is also equipped with a 65kWh liquid-cooled battery and an innovative torque vectoring system directed to the rear axle, which adapts torque between the inside and outside wheel on the curve to deliver maximum performance at all times.

The inaugural PURE ETCR season was a success for the CUPRA X Zengő Motorsport team, the result of a partnership between the high-performance brand and the Hungarian Zengő Motorsport team. From the very first round, held at the Vallelunga Circuit in Italy, the CUPRA e-Racer showed that it had the potential to fight for the title.

Mikel Azcona made history by winning the world's first electric touring car championship race at the Italian track, where his teammate Mattias Ekström finished third. This would not be the only win for a CUPRA X Zengő Motorsport driver during the season: in the second round in Aragon, Spain, the CUPRA e-Racer took the victory again, this time with Ekström at the wheel.

In Copenhagen, Denmark, Ekström continued his good run and finished third. The next event of the season, held at the Hungaroring (Hungary) saw Azcona in pole position again, with Ekström in the top three one more time. Up to five drivers, three of them from CUPRA, left the Hungarian track with a mathematical chance of clinching the first PURE ETCR title in the final round of the championship, which took place in Pau-Arnos (France).

There, CUPRA was unbeatable from the start of the event. Ekström and Azcona won their respective group battles and went into the final with a chance to become "King of the Weekend". Mattias also led qualifying and set the fastest lap in his group, putting him in a strong position to take the title on Sunday, which he did after finishing fifth in the grand final despite an incident with a rival. Azcona, third in Pau-Arnos, managed to finish third in the championship, and CUPRA clinched the manufacturers' title.

In addition to the successes achieved on the track in PURE ETCR, CUPRA has accumulated invaluable experience that is already being applied in the development of new electrified road cars. The CUPRA Born, which arrived on the market this year, and the Tavascan, which will be introduced in 2024, incorporate this know-how directly from the racetrack. CUPRA is also present in Extreme E, an all-electric championship that takes place in the most remote places on the planet and aims to leave its legacy in locations damaged by climate change.