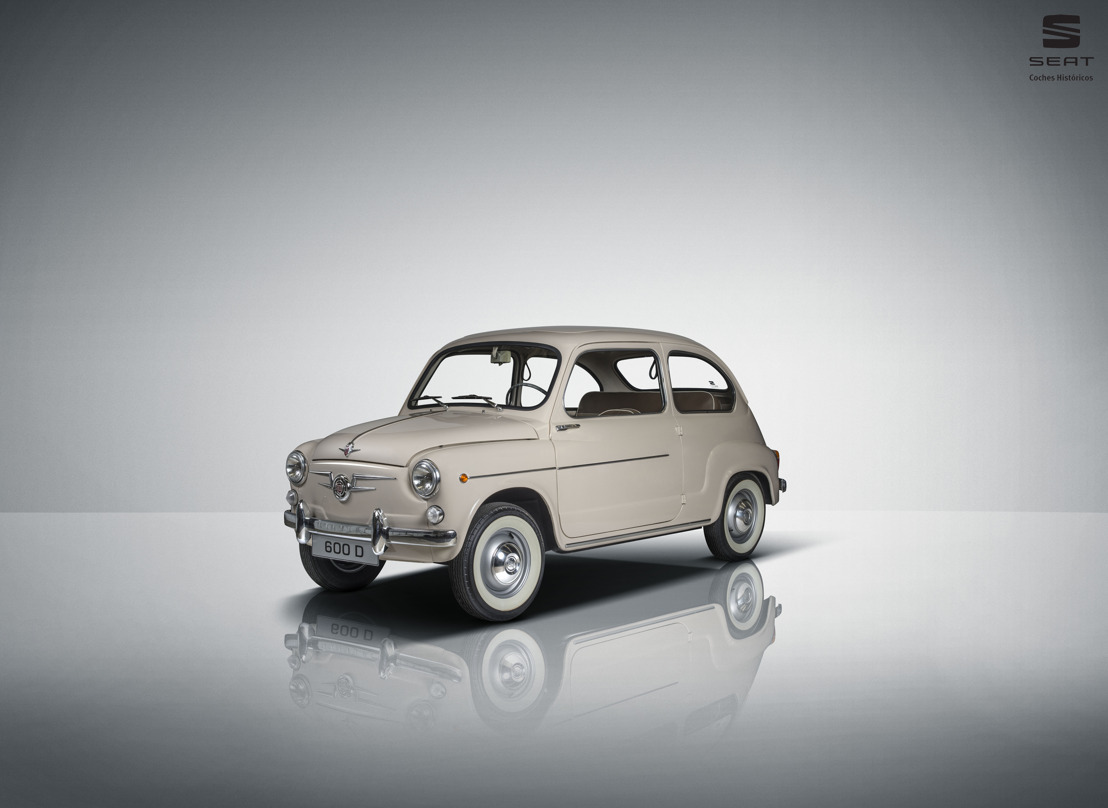 Seventy years ago, SEAT began an exciting journey. On 9 May 1950 the company that put Spain on wheels and democratised mobility was founded. From that moment on, and up until its 70th anniversary this Saturday, SEAT has undergone a profound transformation and has demonstrated a constant capacity for reinvention.

This journey full of challenges has made the company what it is today. The only automotive company that designs, develops, manufactures and markets vehicles in Spain, it is the leading industrial investor in R&D in the country, representing 1% of GDP and exporting 80% of its vehicles. A solid company, part of the Volkswagen Group, the world’s leading car group. A company that is growing and continues offering the best mobility solutions to make people’s lives easier.

SEAT President and Vice-president for Finance and IT Carsten Isensee pointed out that “throughout its 70-year history, SEAT has demonstrated its ability to reinvent itself and successfully meet the challenges that have come its way. A transforming force that has seen SEAT grow from a car manufacturer into a solid technological and industrial company.”

From Barcelona to the world

SEAT opened the doors of the Zona Franca factory in 1953 with a daily production of five SEAT 1400 vehicles. After 40 years of producing iconic models in the brand’s history, such as the SEAT 600 and the SEAT 127, the company decided to build a new, larger, more modern factory, thus shifting production from Barcelona to Martorell from 1993. This plant, which started up after an initial investment of 244.5 billion pesetas (1.47 billion euros), was inaugurated with the launch of the second generation SEAT Ibiza and the new SEAT Cordoba, which were produced at a rate of 1,500 units per day.

Currently, the company has three production centres: Barcelona, El Prat de Llobregat and Martorell, where the Ibiza, the Arona and the Leon are currently manufactured. Moreover, it produces the Ateca in the Czech Republic, the Tarraco in Germany, the Alhambra in Portugal and the Mii electric, SEAT’s first 100% electric vehicle, in Slovakia.  Until today, a total of more than 19 million SEAT vehicles have been produced.

Since the company made its first export sale in 1965, with Colombia as its destination, SEAT has established itself as Spain’s leading industrial exporter, accounting for almost 3% of the Spanish economy’s total exports. Today, SEAT vehicles reach such diverse locations as New Zealand, Mexico and French Guiana.

SEAT’s evolution over the past 70 years has been exponential, from the design of its cars through production to the volume of exports. Today, the same number of cars are produced in three minutes as before in a whole day and compared to the two-year wait in the 1950s for a SEAT 600, nowadays, with the Fast Lane service, you can buy a car in 10 minutes with 5 clicks and receive it in less than 21 days.

A broad and competitive product range

For the past 70 years, the carmaker has launched a total of 75 models, including different versions and generations, among which some major ones that have marked a turning point, starting in 1953 with the SEAT 1400, the first car manufactured by the company, or with the legendary SEAT 600, which was presented in 1957 and soon became a symbol of freedom and mobility. In 1984 the first SEAT Ibiza arrived and in 1999 the SEAT Leon, which has been a sales success since its launch. It is also worth noting that in 2016 the company boosted the range by entering the SUV segment with the SEAT Ateca, the SEAT Arona and the SEAT Tarraco, and announced the SEAT Mii electric in 2019, its first electric vehicle.

The evolution and modernisation of cars has been a constant throughout the journey, which has subsequently added a technological development in all aspects of the car, from safety systems to the most advanced connectivity. In addition, as part of SEAT’s commitment to more sustainable and environmentally friendly mobility, the company is engaged in a major electric offensive. In this sense, it is going to launch new electric and plug-in hybrid models in 2020 and 2021, which will join the currently commercially available electric version of the SEAT Mii; the new Leon family, which has a PHEV version; the Tarraco PHEV and the recently launched CUPRA Formentor, which will have an electric plug-in hybrid variant. Finally, the el-Born will join the Mii electric as the company’s second 100% electric vehicle.

CUPRA, SEAT’s ability to reinvent itself

CUPRA had always been SEAT’s highest expression of sportiness since the launch of the Ibiza CUPRA in 1996. In 2018, SEAT again revitalised its capacity for reinvention and created CUPRA, the company’s brand that was created with the aim of presenting a unique project. CUPRA gives SEAT access to new markets and to new customers, who are looking for a more special product, and which will contribute to increasing SEAT’s contribution margin. The new brand is designed to captivate motoring enthusiasts and is characterised by the contemporary design and sporty performance of its electrification-based models. Following the launch of the CUPRA Ateca and the new CUPRA Leon family, the carmaker presented the CUPRA Formentor, the first model specially designed for SEAT’s sportiest brand and manufactured in Martorell, at its recently inaugurated CUPRA Garage headquarters.

Much more than just a carmaker - a mobility technology company

If SEAT was born with the aim of democratising mobility in Spain, in recent years the company has taken giant steps to become a mobility service provider that goes beyond vehicle manufacturing, in order to respond to one of the great trends of the future: the collaborative, shared and sustainable economy. In this sense, in 2019 SEAT was designated as the Center of Competences for the entire Volkswagen Group in micromobility, to lead the strategy for new products and services for urban mobility. To this end, the company launched SEAT Urban Mobility, a strategic business unit in urban mobility, and presented the eScooter Concept, SEAT’s first motorbike, and the eKickscooter Concept, products which join the electric EXS Kickscooter.

Furthermore, as an example of this capacity for reinvention and total transformation, in 2019 the company created the SEAT:CODE, a centre of excellence in software development. The new lab works to drive two major dimensions within SEAT. On the one hand, it seeks to continue pushing digital transformation and increase efficiency through process digitalisation. On the other, it aims to strengthen business models around the new concepts of mobility, connectivity and car digitalisation with a special focus on SEAT.

In addition, in 2020 the company is going to inaugurate the new CASA SEAT, a space in the heart of Barcelona, which was created to pay tribute to the birthplace of SEAT 70 years ago. CASA SEAT will be the gathering place to discover the mobility of the future and will host multiple activities to become a reference in Barcelona’s cultural agenda.

Present and future of industry in Spain

In its 70-year history, SEAT has been on a steady track of sustainable growth which has driven the automotive industry in Spain. Where vehicle production began in 1953 with a workforce of 925 people, today more than 15,000 employees work at SEAT and it has a multiplying effect on the auxiliary industry, generating some 100,000 jobs overall.

With a turnover of 11.157 billion euros in 2019 and exports of both vehicles and components accounting for 81% of turnover (9.041 billion euros), SEAT is Spain’s leading industrial exporter. Likewise, today SEAT Martorell is the factory that produces the most cars in Spain, the second largest vehicle production market in Europe. It is also worth mentioning that SEAT allocated 1.259 billion euros to investments and R&D expenses in 2019, of which 27 million euros were directly invested in sustainable initiatives at the Martorell facilities with the aim of reducing CO2 emissions and, thanks to an ambitious environmental strategy, making it a zero-carbon-footprint plant by 2030.

The company has also become a reference in occupational health in the corporate environment, following the opening of the CARS Healthcare and Rehabilitation Centre in 2017. This is a unique medical centre that offers preventive and healthcare medicine as well as rehabilitative care to the company’s more than 15,000 workers, and which performs more than 70,000 consultations a year.

SEAT has been a part of people’s lives for 70 years and has also wanted to show its commitment to society and its needs at a challenging time like the COVID-19 crisis. During this difficult period, SEAT has launched various initiatives to combat the virus; specifically, to produce the equipment most in demand by hospitals, such as ventilators. A team of 150 professionals worked for weeks to develop a prototype, using gears printed at SEAT, gearbox shafts and the adapted motor of a SEAT Leon windscreen wiper. As a result, more than 600 emergency ventilators were produced and sent to hospitals all over Spain, which was our small part to give hope for the future, where together we will once again venture into the streets and take to the roads; to experience freedom, little by little.

In the attached press kit, you will find detailed information on the last seven decades.